The Body of Communication 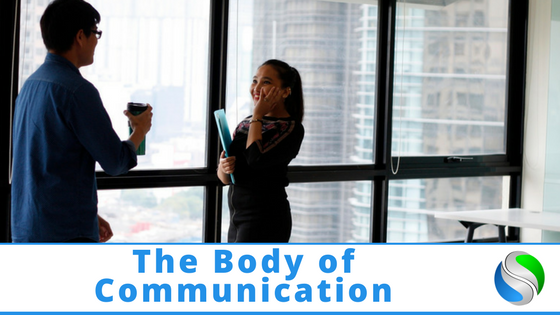 There is still considerable discussion on how we as humans learned to speak.  Introduction to Psychology textbooks outline the various theories about this discussion.  It seems that one of the most popular theory is Noam Chomsky’s[1] (1972) innate Language Acquisition Device (LAD).  Of course, Wikipedia has an exhaustive history of this discussion.

However, Marco Iacoboni[2] (2008) came up with a different twist on the origin of human language in his book Mirroring People. With the discovery of mirror neurons by Giacomo Rizzolatii in the 1980s, Iacoboni pursued the study of mirror neurons into the related human connection of empathy and on into the possibility of the role of mirror neurons in the development of language.  His book includes many scientists researching this same topic

He was fascinated by the innumerable body references we commonly use in our speech like “I can’t stomach that person”, “I got kicked off the team”, “He made my head spin”, “He is a pain in the neck”, etc., etc.  It’s as if we speak with our bodies.

Even more fascinating is the study of body language in children.  Here Iacoboni connects the child’s hand and mouth; before a child sucks its fingers, its mouth opens; a child will point and then bring the hand to the mouth.  At about six months a child will babble and put its hand in its mouth.  At even just hours after birth a child will imitate an adult as when the adult sticks out the tongue and the child imitates the gesture. This goes for hand gestures as well; the child will imitate another’s gestures. Children learn through imitation.  Iacoboni sites many scientific studies of early body gestures as signs of communication.

What is even more intriguing with this early body language development is the connection of mirror neurons to the Broca area of the brain that controls speech.  Scientists have found that through MEG (magnetoencephalography) when mirror neurons in infants “fired” there was a corresponding blood flow in the Broca area.  There seems to be a connection between those mirror neurons and the speech area.

What Iacoboni is asserting is that language development starts in the body, that it is a physical process just as learning to coordinate muscles, eye-hand activity, or walking.  Speech is part of the body development as well as the cognitive learning that language has been proposed to be. Of course, Iacoboni is supported by many scientists who have been studying this phenomenon since the discovery of mirror neurons.

All of this to say that body language has been part of our human communication development since birth and is what makes us eminently human.  Speech is the better part of our ability to communicate but our bodies form the bases of our capacity to speak.

We ought to pay more attention to body language not only in our faces but in our hand gestures and other bodily movements.  A point Iacoboni outlined was the two kinds of hand gestures we make: iconic and beat.  The iconic are the gestures we make in describing graphic ideas; we draw things in space.  The beat gestures are the rhythm of our hands when we are just speaking as when chatting or making a speech of some kind.

This is all fascinating information but the realization that our whole bodies join in our speech makes us more aware of the body movements that accompany our words.  This is total speech.