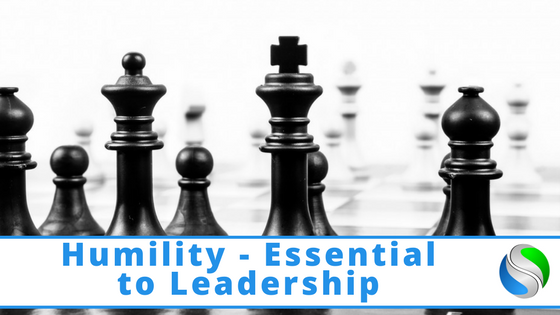 “Laozi (Lao Tze), said to have lived in the 4th century BC and purportedly even taught the Buddha in India, advocated humility in leadership and a restrained approach to governance.” (Wikipedia) Humility, then, has qualified leadership for over 2500 years. In the article by Ryan Westwood (Forbes, 2015), the author outlines how humility is expressed in leadership.

The origin of the word humility comes from Latin “humus” meaning “earth” and thus humility has the sense of “being grounded.”  As a virtue, it implies that no one is better than another.  It is the “ground” that a good leader stands on.  With this level attitude, then, the “playing field” is even for all contenders who hold the same vision and are engaged in the same mission.  Yet, the leader is the “captain” of the team to motivate and direct members to the same goal.

Quoting from the above article on humility, “If you want to move beyond the start-up phase and develop a seasoned, stable, productive business, then practicing humility is the key to success,” the leader stays grounded throughout the corporate process, recognizing everyone on the team as colleagues. We are all gifted with different assets, much like the body is endowed with different abilities.  When we put these abilities together, we make a finely tuned conglomerate of power and purpose, all parts working together.  Every part, every colleague, is as important as the head who is managing the dynamic process of living healthily.  The leader utilizes the energy of the whole body with all its moving parts to progress toward its vision and mission.

It often happens that a leader of an organization could appear to be dominant and narcissistic with a touch of a sociopathic character disorder.  If a leader is the entrepreneur of a company, which was the fulfillment of a lifelong dream, that person could present him/herself as “the boss.”  Such a leader has probably invested great energy, loads of time, and costly resources to establish his company. There is justifiable pride that this founder/CEO/president can portray.

Nevertheless, our leader must come to the realization that the most valuable asset of the company is human capital, the real people that make the company function to achieve its success.  Human capital translates into colleagues.  It Is here that productive growth takes place.  To keep the company’s expansion on course, the founding entrepreneur will best listen to employees and colleagues for fresh ideas and necessary insights.

This is the mark of humility in leadership: active listening that welds employees into strong teams where members learn from each other and from their mistakes.  The humble leader recognizes the efforts and achievements of teams as well as of individuals and provides rewards where appropriate. Most of all, our humble leader respects the privacy of every valuable employee.  The leader “has the backs” of his people.

The supporting behavior of a humble leader motivates and uplifts his human capital, making his/her company “the best place to work” in all the world.  The leader and his team are all grounded in the reality of their vision and mission.